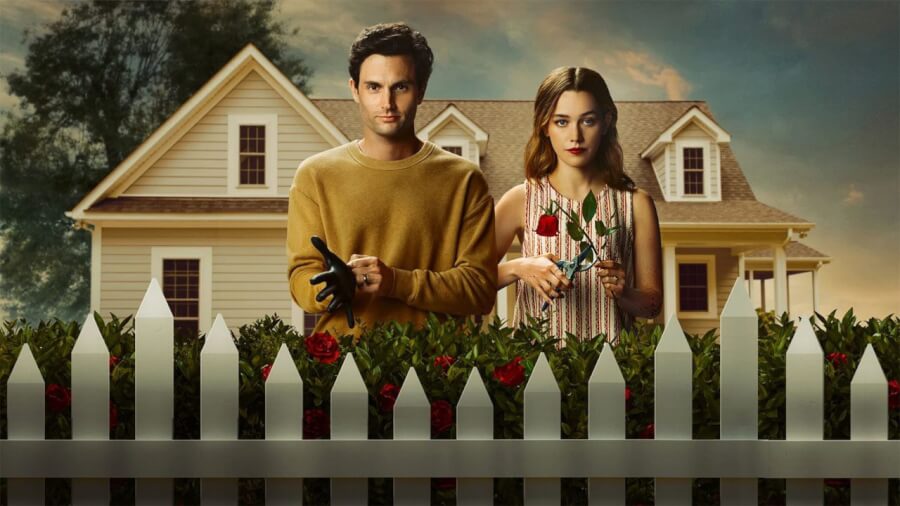 You is returning for a fourth season at Netflix and recently wrapped up filming. At Netflix’s TUDUM event it was revealed that season 4 will be split into two parts, with the first arriving in February 2022, and part 2 in March 2022. Here’s everything we know so far about You season 4 on Netflix.

You is a Netflix Original romantic crime drama series created by Greg Berlanti and based on the novels You and Hidden Bodies by author Caroline Kepnes. The series was originally on Lifetime before Netflix picked up the series as an Original. Once You landed on Netflix, the popularity of the series exploded, and was watched by over 54 million households worldwide.

Each season of You sees Joe move location. The deeply unsettled romantic serial killer has traveled from New York to Los Angeles, to Madre Linda, and finally to Paris, France.

When was You renewed for season 4?

In what was a surprising move made by Netflix, the announcement that You had been renewed for a fourth season came 48 hours before the third season was released.

Alongside the announcement, Sera Gamble (one of the two showrunners) said:

“We’re deeply grateful that Netflix has shown You such monumental support, and that people around the world have enjoyed watching Joe really get it all very wrong over the past 3 seasons, said Gamble. “The whole You team is excited to explore new, dark facets of love in season 4.”

As one of the most popular Originals of the Netflix library, there was no doubt in that You would not be was always going to be renewed for a fourth season. However, we were expecting the announcement to be made after the third season landed, just in case it spoilt whatever was in store for Joe in season 3.

When is the You season 4 Netflix release date?

At the Netflix TUDUM event, it was revealed that the fourth season of You will be split into two parts.

What to expect from You season 4?

The grand finale of You season 3 saw Joe and Love’s extremely hostile relationship come to a climactic end, with Joe switching continents to find his latest obsession, Marianne.

Once again, Joe has changed his identity and is now going by the name of Nick. It’s no surprise Joe would have to change his identity considering the name of Joe Goldberg-Quinn is now famous in the USA thanks to Joe successfully pinning all of the Madre Linda murders on Love.

Now that Joe is in Paris, his search for Marianne begins. An expert stalker, if Marianne is indeed in Paris, then Joe will definitely find her sooner rather than later. 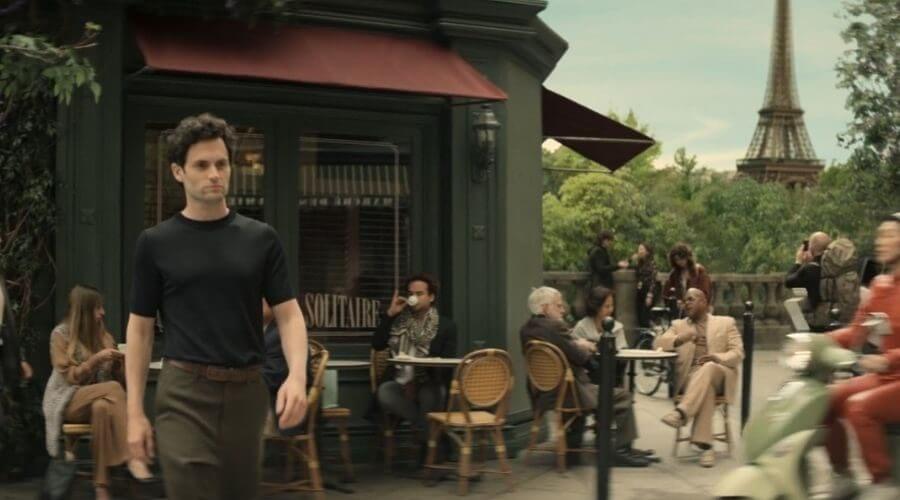 Joe fleeing to Paris in search of Marianne

Will Marianne even be happy to see Joe?

When Marianne came round to the home and was confronted by Love, Joe was incapacitated at the time. And although Love initially wanted to murder Marianne, it’s thanks to Marianne’s daughter, Juliette, that swayed Love’s hand.

Despite resisting the urge to murder Marianne, it did seem like Love was somewhat able to convince Marianne of Joe’s wrong-doings, and as Marianne never saw Joe incapacitated on the floor of the dining room, it will be his word against Love’s when they meet.

There’s also the chance that Marianne may even believe Joe is dead, assuming that she followed any of the news of Madra Linda, which reported that Joe was one of the victims of Love.

Marianne isn’t stupid. To see Joe in the flesh when he’s supposed to be dead will arouse serious suspicion, not to mention he won’t even have his son, Henry, to which Joe will somehow have to convince Marianne that leaving his son behind was what was best for him. 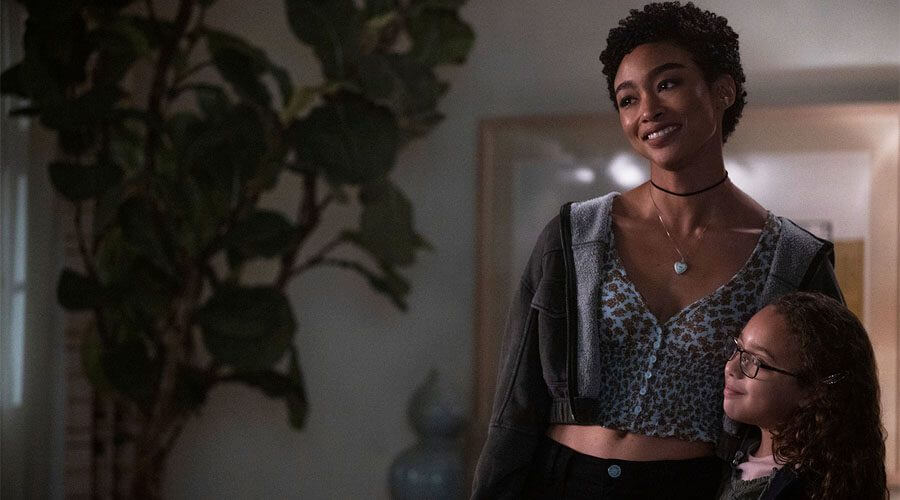 Joe’s past finally catches up with him?

From one location to the next, wherever Joe goes, a trail of bodies lie in his wake, even if he didn’t necessarily kill them himself. Given just how many people have died directly or indirectly through Joe will have to catch up with him eventually.

The Parisian police aren’t going to be looking for a dead man, however, if Joe somehow finds himself in custody and the American authorities are contacted, it wouldn’t take long to put two and two together before they realize that Joe faked his death and fled the country.

It then wouldn’t be hard for them to connect all of the murders from Madra Linda, to L.A. and back to his life in New York to then recognize him as a serial killer. 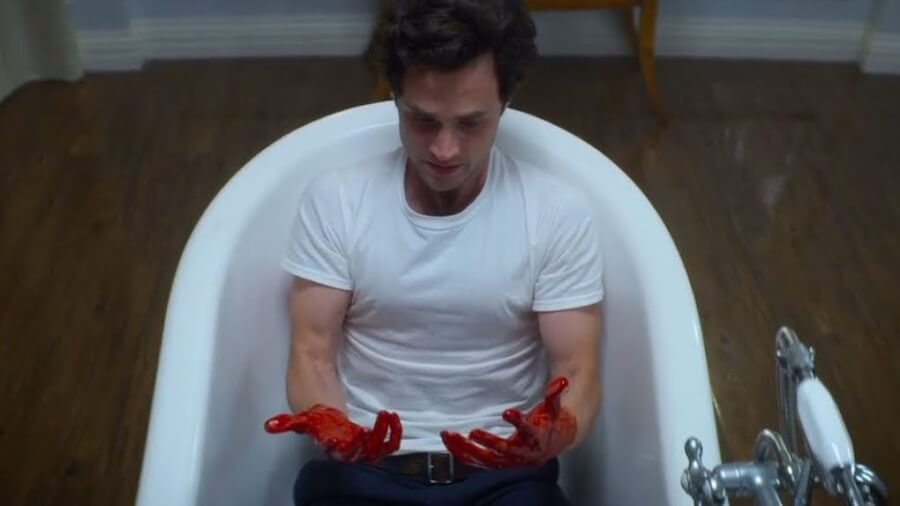 Joe has the blood of many people on his hands

There has to be an end of the road for Joe somewhere, and whether or not he finds “the one” won’t matter at all if there’s an international manhunt out for him.

And if all else fails in Paris, then the only option Joe has is potentially fleeing to the Philippines where his “friend” the real Will Bettelheim lives. 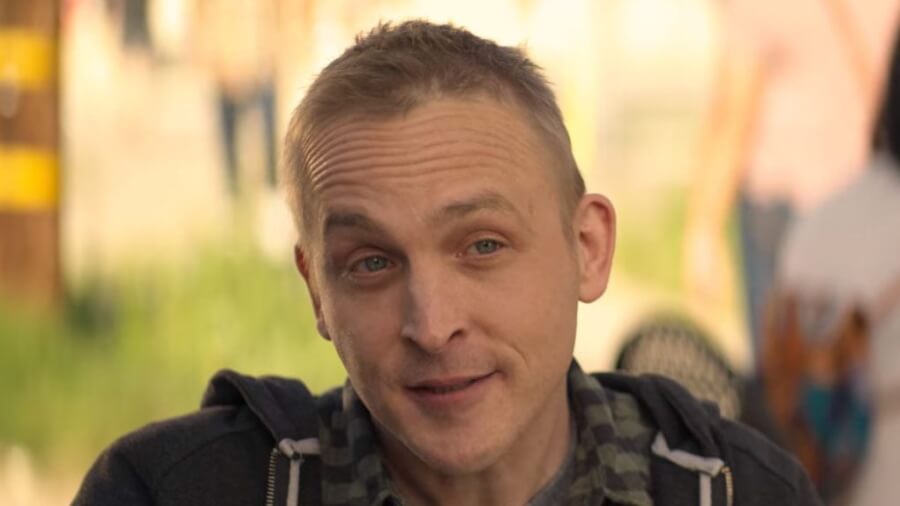 Is Will Bettelheim the key for Joe in case he needs to flee Paris?

We should also point out that there have been plenty of rumors that season 4 will take place in part in Paris (some have even gone a step further and suggested an Emily in Paris crossover).

In an interview with Sera Gamble, EW pressed on the idea of season 4 being set in Paris saying:

“It could. I think Joe is great when he’s in an environment that’s not natural to him, that’s foreign to him. So literally foreign could be very cool. And it’s a big, wide world out there. That’s something I’ve learned from watching Netflix, where I’ve been watching shows from lots of other countries lately. It’s the thing about being in a pandemic. You’re home. You can barely go down the street, much less get on a plane. And I have to say, it’s made us want to explore more of the world in any way we can.”

As it currently stands the only confirmed cast member who will be returning for the fourth season of You is Penn Badgley.

Tati Gabrielle is expected to reprise her role as Marianne in the upcoming season.

In February 2022, it was announced that Lukas Gage had joined the cast of You season 4.

Gage will play Adam, an American ex-pat and the youngest son of a wealthy East Coast magnate. Described as an entrepreneur and a gambler, Adam is a warm and funny party host and fast friend but, just like Joe, is hiding plenty of secrets.

Lukas Gage is perhaps best known for playing Tyler on HBO’s Euphoria, but you’ll also soon be seeing him on Peacock’s Angelyne. 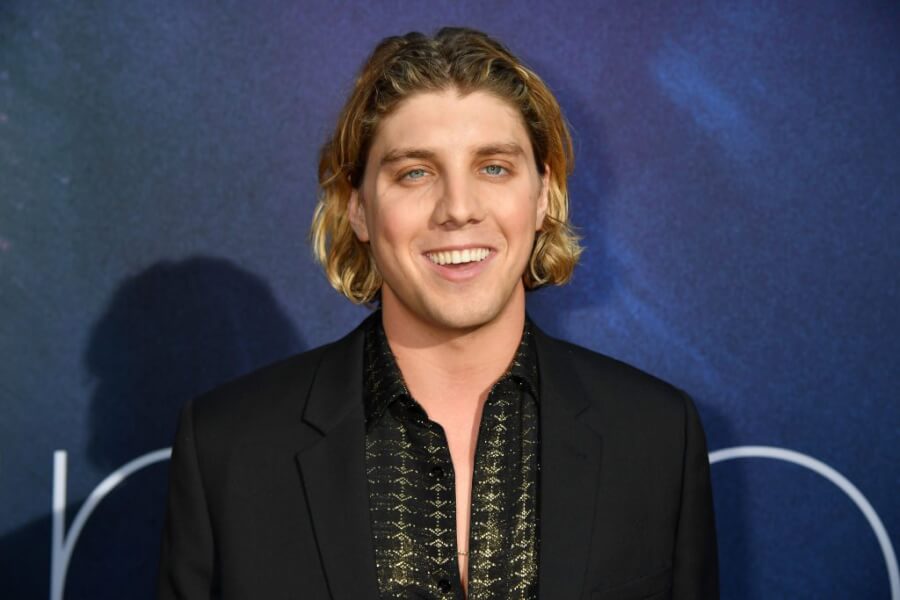 Photo by Jeff Kravitz/FilmMagic for HBO

Throughout late March and April 2022, the rest of the You season 4 cast was assembled: Cast grid for You season 4

It was first reported that ex-Eastenders actress Tilly Keeper will be joining the cast of You season 4 back in March. Keeper portrayed the role of Louise Mitchell on the British soap from 2016 to 2020. She’ll be playing the role of Lady Phoebe in the new series, described as an “aristocratic socialite with an avid fan base, Phoebe’s true colors show when she’s alone with her friends”

On March 25th, British actress Charlotte Ritchie was announced by Deadline to be joining the cast. Best known for the series Ghosts, she’ll play Kate described as “smart, independent, suspicious, and misses nothing” and “an art gallery director whose job means managing tempestuous artists.”

Amy Leigh Hickman best known for Ackley Bridge, will play Nadia, “a literature major with a love of genre storytelling and the aspiration to be a serious author.”

Ed Speleers who recently featured in Netflix’s Against the Ice but is also known for Outlander and Downton Abbey will play Rhys. Rhys is described as an “author whose memoir garnered him acclaim and pressure to launch a political career.”

Rounding out the newcomers includes:

What is the production status of You season 4?

On November 10th, 2021, the writers confirmed they were back in business, returning to their offices (season 3 was mostly written remotely).

The Instagram post came with the picture below (of a doormat that can be found on Etsy) and the caption:

Gamble also took to Instagram to express her excitement at returning to the writer’s room, saying:

“… and we’re back. In a 3 dimensional office, which is wild. The writers’ room opened today. Here’s some office art. We’ll be over here going full crazy for the foreseeable.” 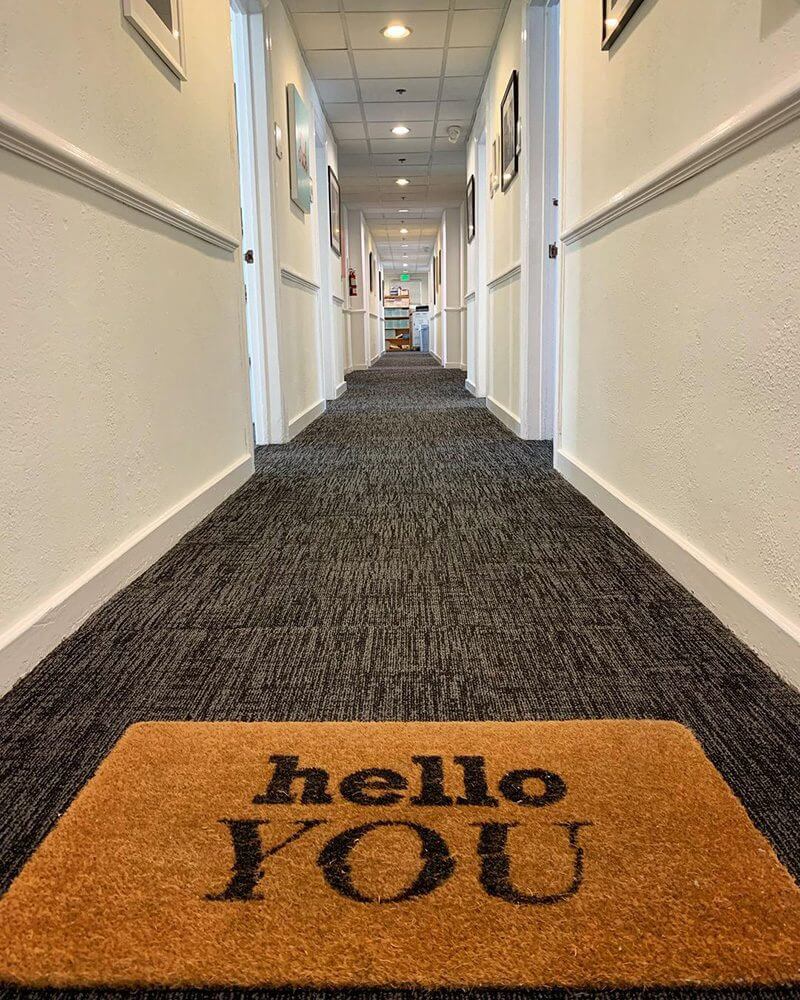 In February 2022, we got word that filming on the new series is currently scheduled to begin in mid-March 2022 and run through to July 2022. In addition, our listing indicates that filming would predominantly take place in the United Kingdom.

On February 17th, the YouWriters account shared the first draft of episode 1 written by Sera Gamble and Leo Richardson. While the episode title has been blurred out, some have speculated that episode 1 is “Joe Goes to Italy”. 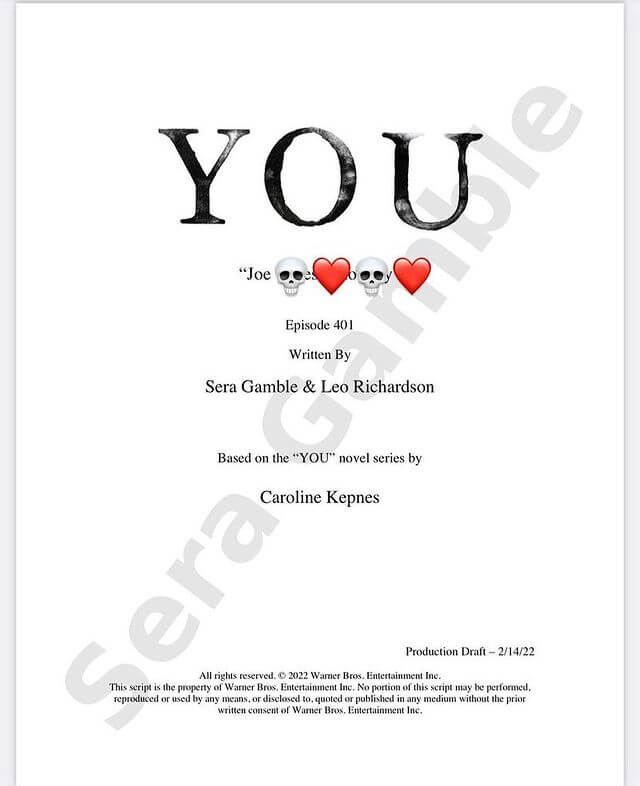 Script for Season 4 Episode 1 of You

Filming for the fourth season of You began a little later than expected and started on March 22nd, 2022. We’re told it’s currently expected to wrap up filming on August 31st, 2022. 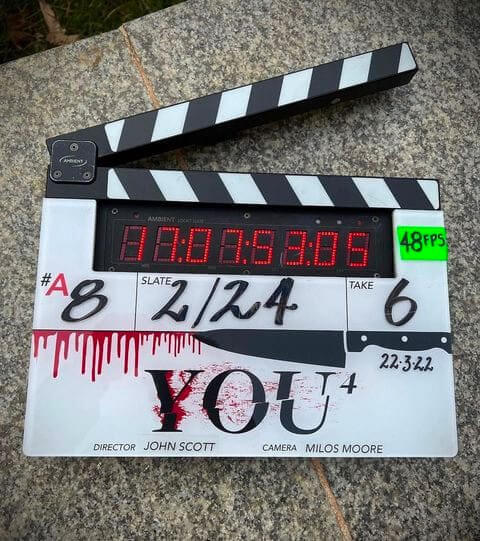 Among the confirmed locations the show is filming this season includes the University of London in the United Kingdom where Penn Badgley was spotted in a suit walking through the university campus.

🚨: NEW videos from the set of #YouNetflix season 4 via fans on tiktok <3 pic.twitter.com/1fVGuMHaSO

Joe’s back for a bloody good time. If his book choice tells us anything… our boy might not be in Paris anymore. pic.twitter.com/xXH7BAjnBU

As of August 26th, 2022 filming wrapped on the fourth season of You!

Wrapped of YOU S4. Had the best time with the best cast and crew ❤️ @YouNetflix pic.twitter.com/u0THzF8giq

Is season 4 the final season of You?

Netflix has not revealed with the renewal announcement if season 4 is the last we’ll see of Joe. So as it stands, there’s a chance we could see even more of You in the near future.

Are you looking forward to watching more of You on Netflix? Let us know in the comments below.

Editor’s Note: This preview was first published on November 11th, 2021 and has been updated over time to reflect new information. It was last updated in September 2022.