The fifth and penultimate season of Netflix’s The Crown will once again refresh the cast and is due to hit Netflix after a two year hiatus in November 2022. Here’s the lowdown on everything we know about season 5, including the newly released information courtesy of Netflix Tudum.

Starting in 2016, The Crown has gone from strength to strength with each new season. The polarising drama has attracted millions of subscribers as the life, and the reign of the late Queen Elizabeth II are explored.

The series was created by Peter Morgan and derived from his 2006 film The Queen. From day one, The Crown has been one of the most expensive television series that Netflix offers. It is estimated that the first season alone cost roughly $100 million to produce.

When is the Netflix release date for The Crown season 5?

The Crown was featured at Netflix’s most recent TUDUM event, which revealed that the fifth season will premiere on Netflix on November 9th, 2022. Who are the new cast members of The Crown season 5?

Like Claire Foy before her, Olivia Colman’s time as Queen Elizabeth in The Crown is over. Colman and all of the cast members from the third and fourth seasons of The Crown will be replaced by a new cast that will portray the aging members of the Royal Family, respectively.

Imelda Staunton is famous for her portrayal of the villain Dolores Umbridge in the Harry Potter series. 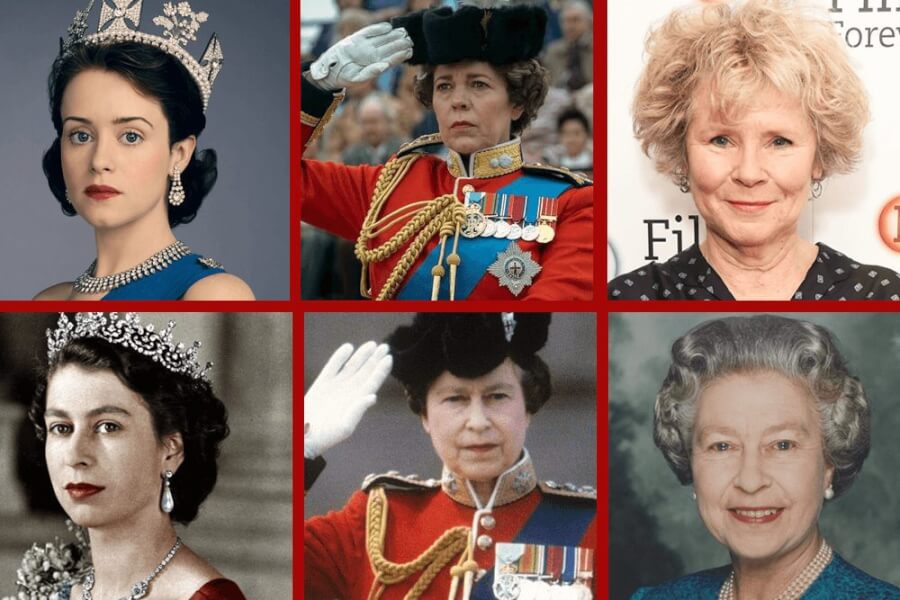 Imelda Staunton (top right) will be the third lead actress to portray Queen Elizabeth II in The Crown.

We have our first look at Imelda Staunton in her role as Queen Elizabeth II, and once again, the casting director of the series has cast the role perfectly. 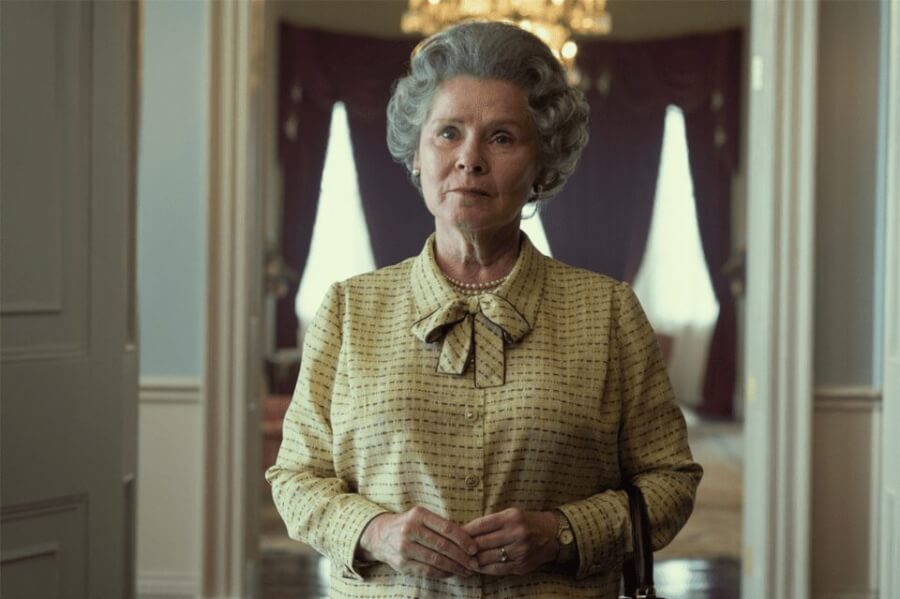 Jonathan Pryce is replacing Tobias Menzies as Prince Philip, the Duke of Edinburgh. Coincidentally both actors are largely well known for acting in HBO’s Game of Thrones, but Pryce is most well known for being Bond villain Elliot Carver in Tomorrow Never Dies. Most recently, Pryce portrayed his real-life look-a-like, Pope Francis, in the Netflix Original movie The Two Popes. 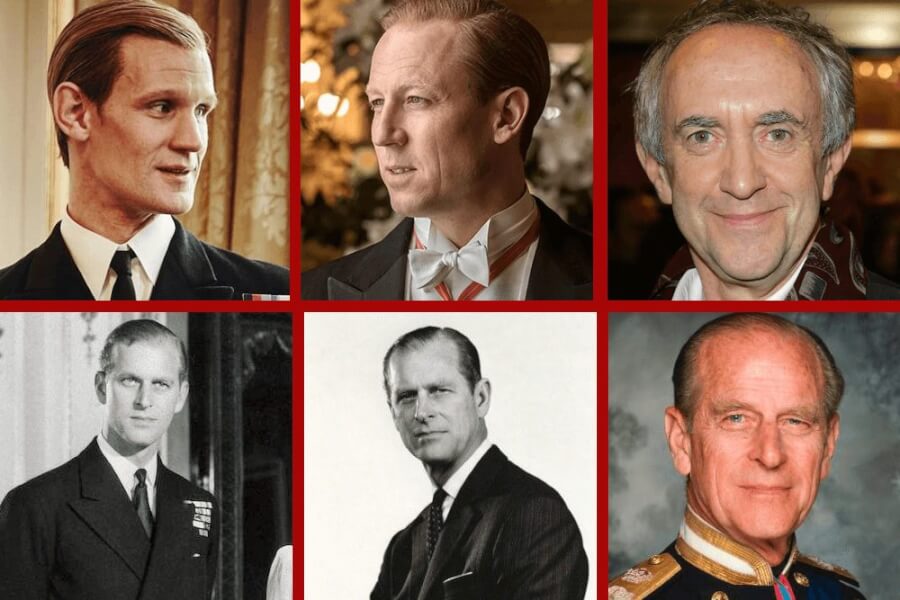 Jonathan Pryce (top right) will be the third lead actor to portray Prince Philip, Duke of Edinburgh in The Crown.

Replacing Helena Bonham Carter as Princess Margaret, Countess of Snowdon is Lesley Manville. Both Vanessa Kirby and Helena Bonham Carter have done excellent jobs in their portrayals of Princess Margaret, and we expect Manville to follow in their footsteps. Manville is known for her portrayal of the fairy Flittle in Disney’s live-action of Maleficent, and Maleficent: Mistress of Evil, respectively. 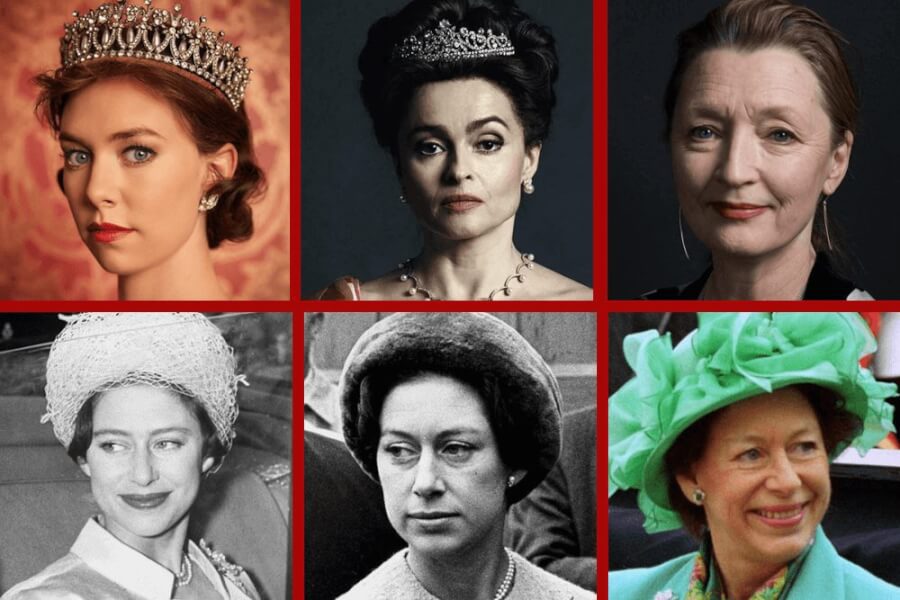 Lesley Manville (top right) will be the third lead actress to portray Princess William in The Crown.

Replacing Josh O’Connor as Prince Charles is Dominic West. The casting of West has been a major surprise, and we’re more than intrigued to see how the actor will look in his portrayal of Prince Charles. Arguably any casting of Prince Charles will be under scrutiny as the heir to the throne certainly has a unique look that not many could duplicate. West is most well known for his role on The Wire as Detective James McNulty. 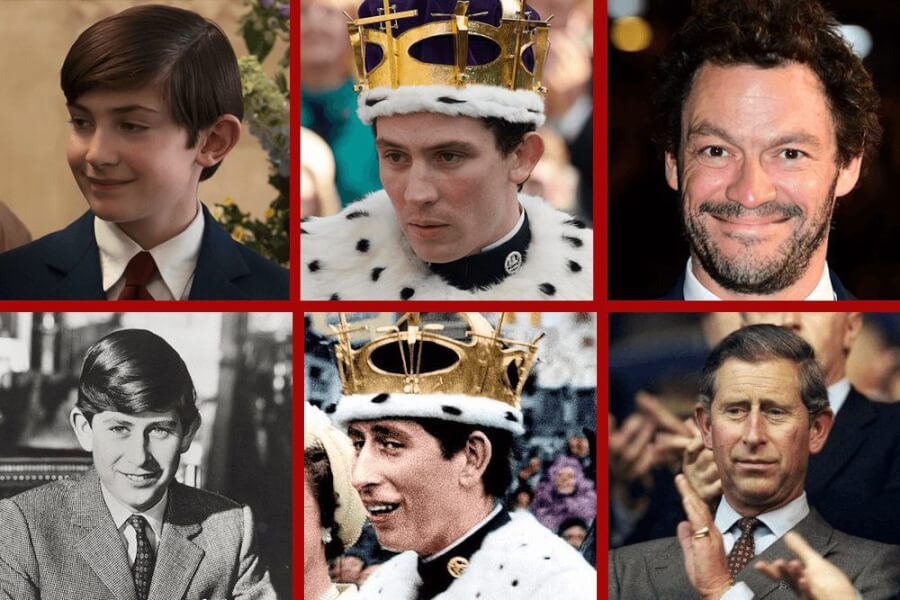 Dominic West (top right) will be the third actor to portray Prince Charles in The Crown.

A Picture of Dominic West in his role as Prince Charles has been revealed by Netflix. 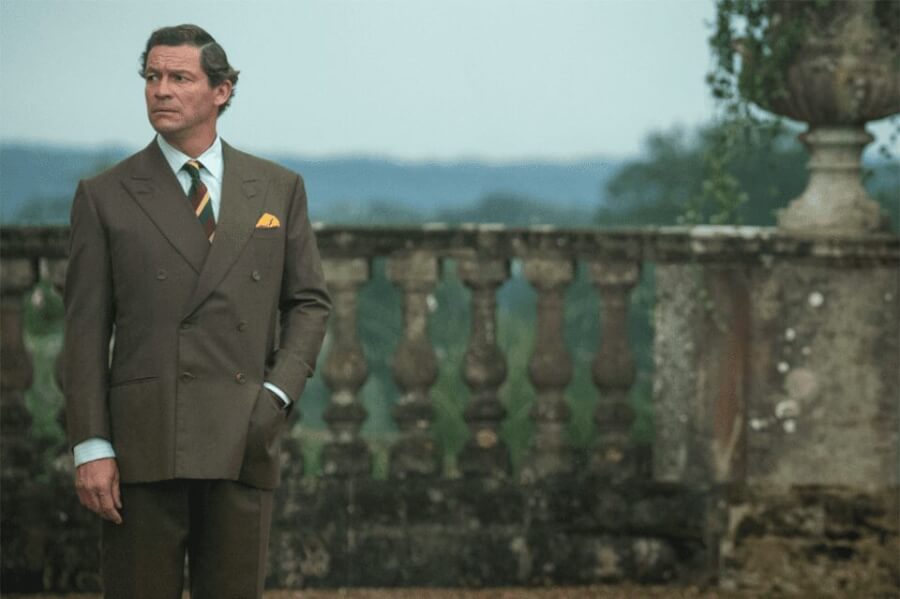 Eagle-eyed Marvel fans will recognize Debicki for her portrayal of Ayesha, the Golden High Priestess of the Sovereign in Guardians of the Galaxy 2. 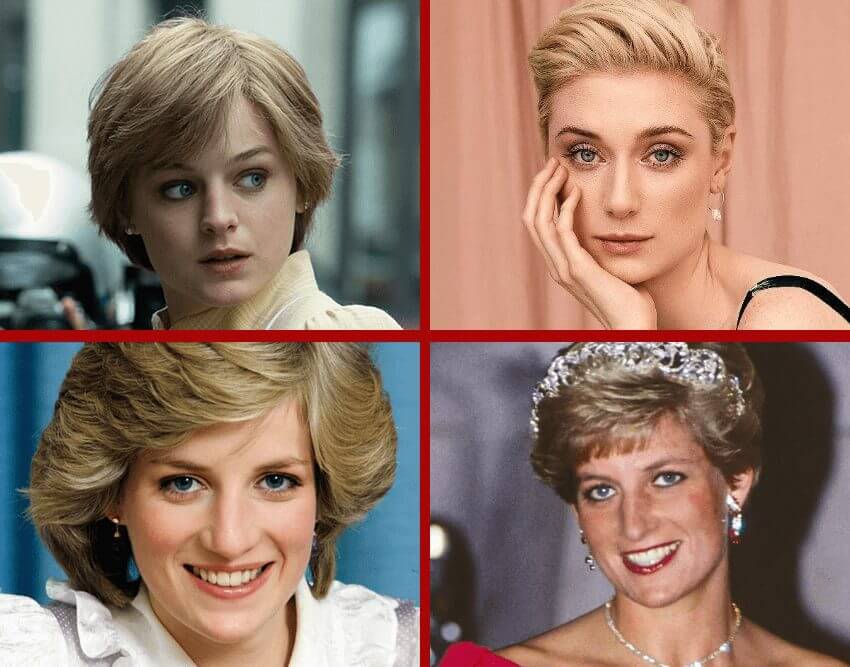 Elizabeth Debecki will be the second actress to take on the role of Princess Diana.

Our first look at Elizabeth Debecki as Princess Diana has been revealed. 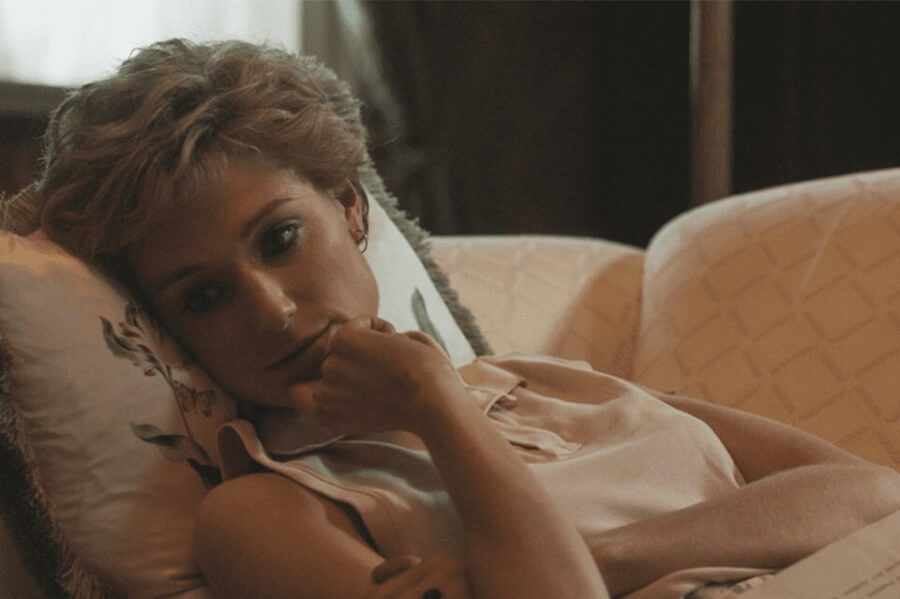 We also have an update on the supporting cast, which are also replacing the previous actors from seasons 3 and 4 of The Crown, respectively.

Erin Doherty was flawless in her time on The Crown as Princess Anne and provided us with an incredible performance that is up there with the very best of the cast. Taking over the mantle of Princess Anne is Humans actress Claudia Harrison. 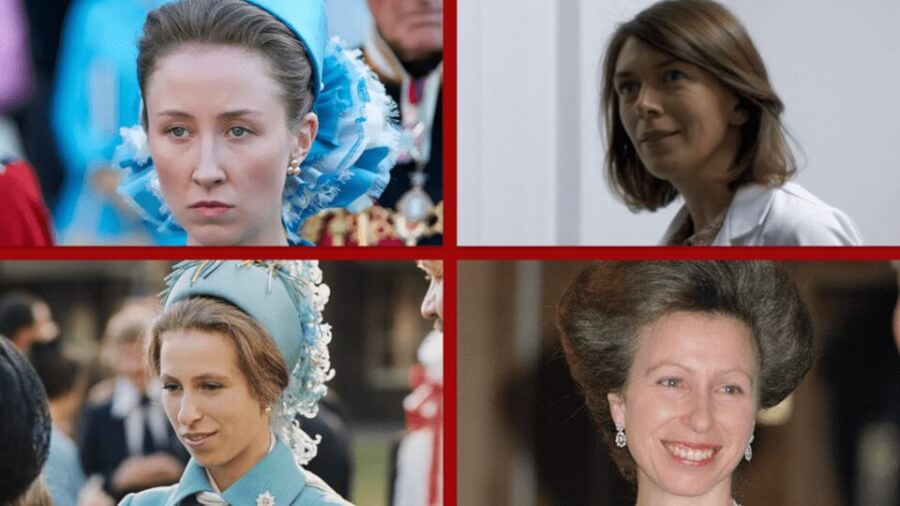 One of the most controversial figures of the Royal Family, Emerald Fennell’s was also excellent in her portrayal of Camilla, and arguably we wish we could have seen more. However, taking over for Fennell is actress Olivia Williams who is well known for her roles in The Postman and Peter Pan (2003). 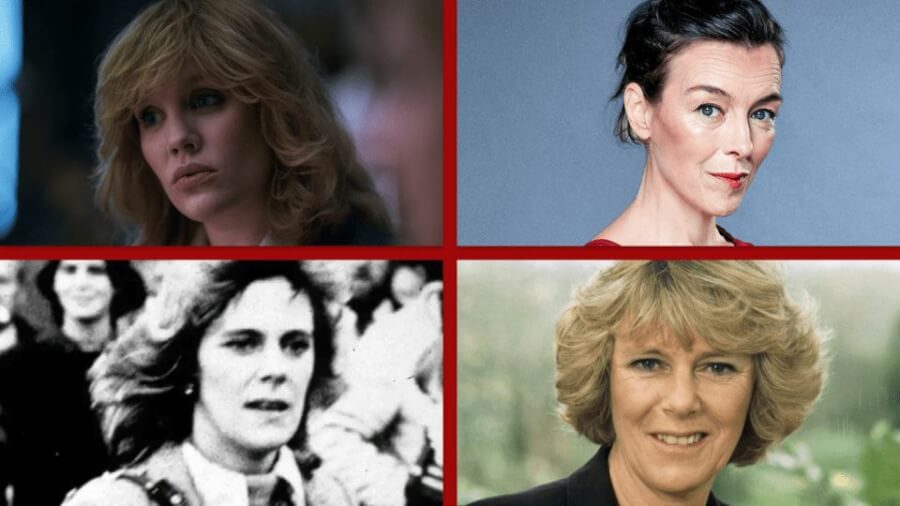 Tom Bryne barely featured in his role as Prince Andrew but the few onscreen appearances he had left a memorable impression amongst viewers. James Murray, who recently starred in Netflix’s incredibly expensive action-thriller 6 Underground, is taking over the role of the incredibly controversial royal figure. 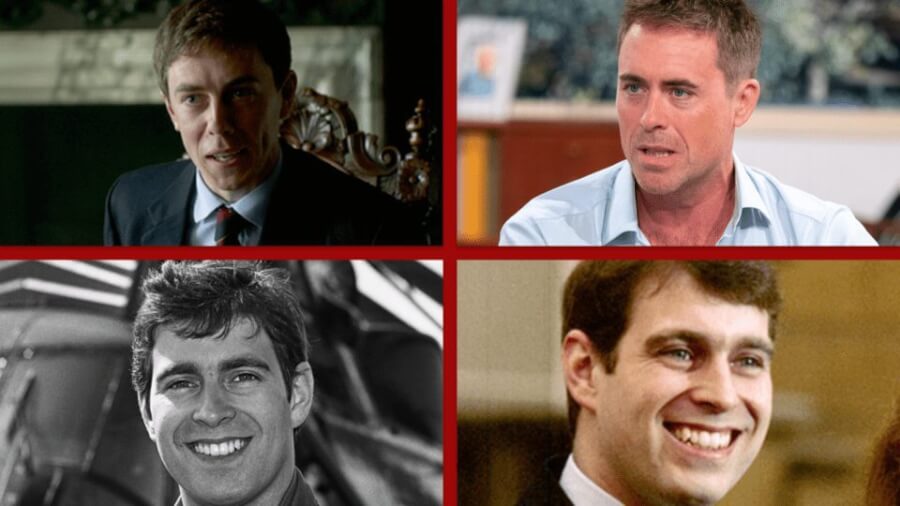 Former Conservative leader and British prime minister John Major have yet to appear in The Crown, but his appearance will mark the end of Margaret Thatcher’s premiership and Gillian Anderson’s time on the series. Jonny Lee Miller, famous for his roles in Trainspotting and Elementary will take on the role of the conservative PM. 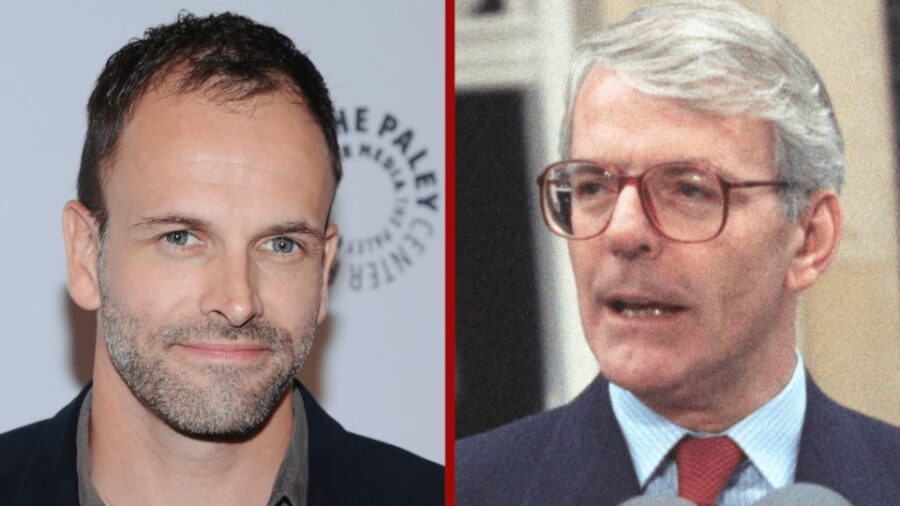 Which historical events will we see in The Crown season 5?

The 1990s was arguably one of the most challenging years of Queen Elizabeth’s reign. In particular, the Queen has lamented that 1992 was her “annus horribilis” (horrible year), which was rocked by royal scandals and political discord.

In 1992, three of the four children of Queen Elizabeth separated or divorced from their partners. Most famously was the separation of Princess Diana and Prince Charles.

Public opinion towards the royal family took a huge hit in the decade, paving the way for a rise in republicanism amongst some of the population. Much of the discord between Queen Elizabeth and her subjects was not aimed at her directly and more toward the behaviors of extended family members.

In 1997, one of the most controversial events in British history took place in Paris, when Diana was killed in a car crash. In response, the Queen and Duke shielded Princes William and Harry from the onslaught of the press, which in turn caused public opinion to waver, when in the eyes of the public, the Queen had not addressed her former Daughter-in-Law’s death.

Historical events we’re likely to see in season 5 of The Crown:

What is the production status of The Crown season 5?

Executive producer Suzanna Mackie may not be involved in the upcoming season as she recently signed an exclusive output deal with Netflix under Orchid Pictures.

What is the episode count for The Crown season 5?

A further ten episodes will be available to stream when The Crown returns for season 5.

Is a sixth season of The Crown coming to Netflix?

When the series was renewed for its fifth season it had been announced it would be The Crown’s last. In the following months, creator Peter Morgan decided to reverse the decision, and a sixth and final season of The Crown will be coming to Netflix in 2023.

Morgan had the following to say about the decision to renew the series for a sixth season:

As we started to discuss the storylines for Series 5, it soon became clear that in order to do justice to the richness and complexity of the story we should go back to the original plan and do six seasons. To be clear, Series 6 will not bring us any closer to the present-day — it will simply enable us to cover the same period in greater detail.

There have also been rumors that season 6 will be split into two volumes.

We’ve got a separate preview of everything we know about season 6 of The Crown here.

News from the palace: we can confirm there will be a sixth (and final) season of @TheCrownNetflix, in addition to the previously announced five!

Are you excited for the fifth season of The Crown on Netflix? Let us know in the comments below!