Sweet Magnolias is returning to Netflix for a third season. Here’s everything we know so far about Sweet Magnolias season 3, currently filming in Georgia. Here’s what we can expect from season 3 of Sweet Magnolias and how season 2 of the show performed on Netflix.

The series is based on the novel series by Sherryl Woods and while there’s been some divergence between the story told in the book and what we’ve seen on screen, there’s plenty more source material for the show to pull from. So let’s dig into Sweet Magnolias season 3 chances and what we can expect.

First debuting in May 2020, we finally got a second season of Sweet Magnolias just a few months shy of two years after its initial premiere.

Will Netflix Renew Sweet Magnolias for a season 3?

Two months after season 2 dropped we were still yet to hear of an official renewal or cancelation but in early May, we got the thumbs up more episodes were on the way. Season 3 is once again confirmed to be 10 episodes in length.

The confirmation was followed by the Sweet Magnolias Writers Twitter page tweeting:

“We’re going back to Serenity, y’all! We are so thrilled to share we have a Season 3 of Sweet Magnolias. Can’t wait to welcome y’all home.” 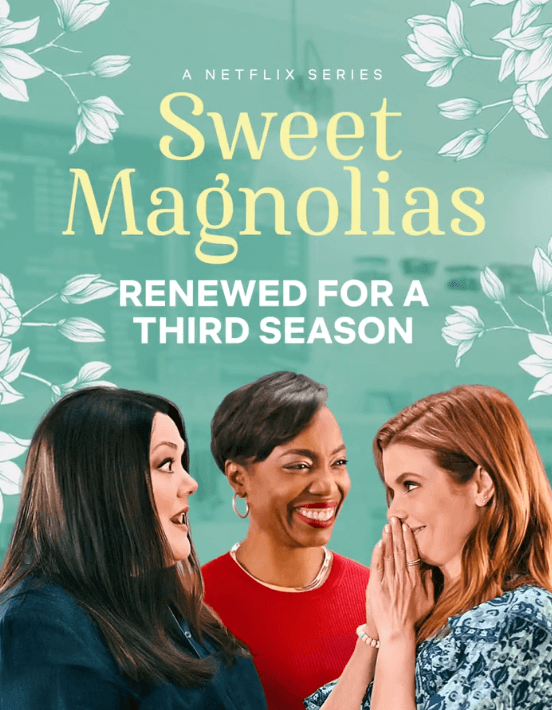 Unlike some of the other shows in the genre, Sweet Magnolias wasn’t renewed ahead of time so it came down to viewership and the “stickiness” of the series.

What we mean by that is that Netflix will look at the show’s viewership, among other factors, when coming up with what’s been referred to as adjusted view share.

Our renewal prediction was that the show maintained a solid base and is one of the few shows that manages to appeal to a broad audience across the United States and, therefore, was highly likely to get renewed. 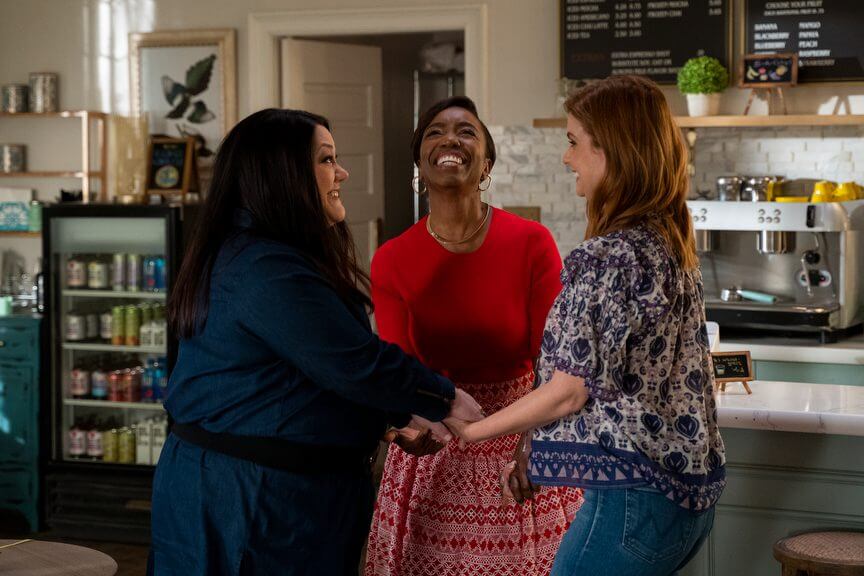 When will filming start for season 3 of Sweet Magnolias and when will it release?

Filming on the new third season is once again taking place in Covington and Atlanta in the state of Georgia in the United States.

In early June 2022, the team behind the show was scouting for new locations. In an Instagram post, Sheryl Anderson stated:

“Thrilled to be plotting and planning Season 3, with friends, old and new!!!”

On July 1st, the star of the show, Joanna Garcia Swisher, posted on Instagram, revealing that she had dyed her hair once again to reprise her role in the third season, suggesting that filming is imminent. Filming did get underway in July 2022, with the official Sweet Magnolias page posting that they’d begun filming on July 18th, 2022. Their post included the following caption:

“‘Shall we begin?’ So happy to be welcoming everyone home to Serenity for day one of filming Season 3 of Sweet Magnolias!”

On the announcement that the third season is in production, Sheryl J. Anderson said:

“It’s a joy, privilege, and blessing to be back in Serenity.” Norman Buckley, who has directed numerous episodes of the show, is expected to return to the director’s chair, according to numerous posts. Buckley also continues to serve as the show’s co-executive producer.

On September 3rd, 2022, Sheryl J Anderson posted that they were halfway through filming on Instagram, where the showrunner thanked a gelato stall, saying:

“Many thanks to @dulceartisangelato for helping us celebrate Halfway Day!!! Hard to believe we’ve shot half of Season 3. Time flies when you’re working with people you love!!!”

Given that we’re at the halfway point, production is due to continue on Sweet Magnolias season 3 until around October 20th, 2022.

Anderson has posted numerous behind-the-scenes photos throughout filming, including one on August 27th, where we see night shooting at a basketball court. How well has Sweet Magnolias season 2 performed on Netflix?

After a strong start, Sweet Magnolias quickly tailed off in viewing according to Netflix’s top 10 data.

The arrival of season 2 also saw an uptick in viewership to the first season too. Season 1 recorded 21.64 million hours viewed between February 6th and February 13th.

Here’s how the viewership for Sweet Magnolias looks from week to week:

If we compare the first two weeks to Virgin River season 3 given they’re very similar in genre, Sweet Magnolias lags behind a little but follows the same trend pattern.

Nielsen’s top 10 data can provide us with a look into how well the show is performing in the United States. Between January 31st through March 6th, the show racked up 4,629 million minutes.

We can also look at raw Netflix top 10 data to see where the series is performing well.

The Sweet Magnolias writer’s room celebrated their 7th day in a row in the Netflix top 10s with a big picture of the cast and crew.

Outside of viewing stats, we can look at how the show is performing on Google Trends and IMDb’s MovieMeter.

IMDb’s MovieMeter tracks inbound traffic to respective shows and movie pages. It allows you to get a good idea of how popular shows are compared to other networks. Season 1 of the show peaked at #4 in its launch week whereas the second season only managed to get up to #15.

Google Trends echoes that the second season didn’t quite match the same heights as season 1. It also is seemingly showing a much steeper dropoff compared to the first season too.

What to expect from Sweet Magnolias season 3

Season 2 ends with plenty of cliffhangers, continuing the tradition over from season 1.

Season 2 ended with Maddie, Helen, and Dana Sue mourning the passing of Miss Frances (Cindy Karr). Following the funeral, we see an unexpected event with both a proposal and a confrontation in the restaurant, leading to Cal being escorted away in cuffs. We also know that someone has returned after the main trio saw footage of tires being slashed on Sullivan’s delivery van.

Helen (played by Heather Headley) had a rough ride in season 2 with several traumatic events but the season ended with her being proposed to by Ryan. Season 3 will likely kick off with the decision she makes. 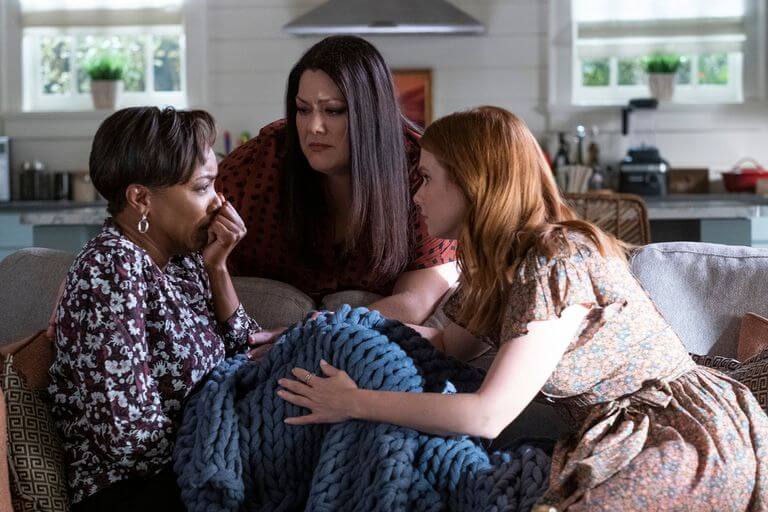 In an interview with TVLine, Sheryl J. Anderson answered many of the burning questions after the conclusion of season 2.

When asked about who slashed Dana Sue’s tires, she said, “I will just say she has a past in common with our ladies and some other folks in town,” adding, “She’s been away for a while, but she has come back with an agenda. She has come home to settle some scores.”

Anderson also said we could “potentially” see the return of Victoria and implied we could see other “troublemakers” return in the future too. Dana Sue’s relationship was addressed, too, where Anderson said that three-way dance will likely continue to be complicated.

Speaking to Glamor, Anderson said there isn’t one sole question heading into season 3 compared to season 2 other than the big one being about a renewal saying, “I hope the main question that everybody has at the end of season two is: Are they going to get a season three?”

Alongside the renewal confirmation, it was announced that stars JoAnna Garcia Swisher, Brooke Elliott, and Heather Headley would all be reprising their roles.

While we’re waiting for more news on the third season, Netflix is still running its book club hosted by Uzo Aduba (Orange is the New Black), and Sweet Magnolias was the book in focus in February 2022.

Are you looking forward to watching season 3 of Sweet Magnolias on Netflix? Let us know in the comments down below.

Netflix Top 100: ‘Devil in Ohio’ and ‘Love in the Villa’ Biggest Titles This Week