‘Rebel Moon’ Netflix Movie: Everything We Know So Far Zack Snyder is teaming up with Netflix once again to produce and direct two major sci-fi movies: Rebel Moon Part 1 and Part 2. The new movie(s) is described as an epic sci-fi adventure compared with Star Wars in terms of scope and scale. Here’s an updated look at what we can expect from Rebel Moon and everything we know.

Zack Snyder will direct and co-write the film and will reunite with many of his colleagues from past projects. The script for Rebel Moon will be co-written by Shay Hatten, who co-wrote Army of the Dead, and Kurt Johnstad, who worked on 300 with Snyder. 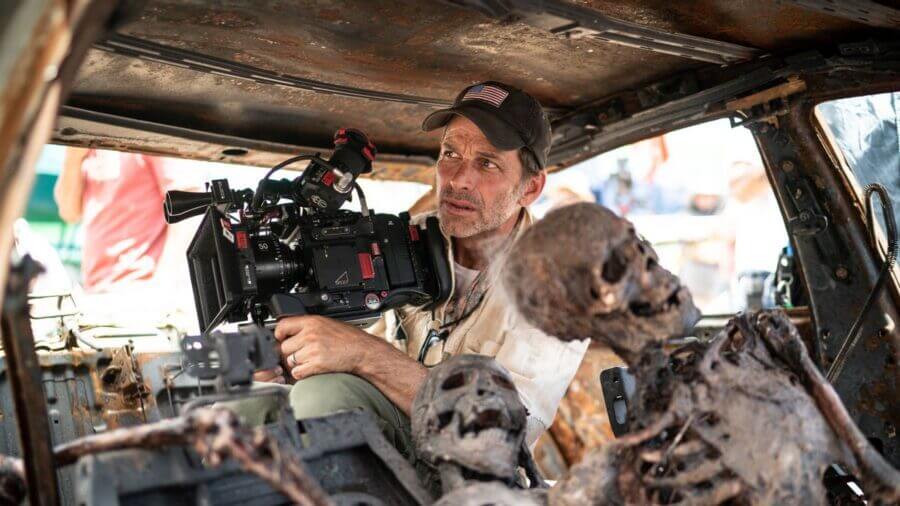 Snyder commented on the inspiration for Rebel Moon in his THR interview:

“This is me growing up as an Akira Kurosawa fan, a Star Wars fan. It’s my love of sci-fi and a giant adventure.”

Snyder will produce Rebel Moon with his wife and producing partner Deborah Snyder via the duo’s Stone Quarry along with longtime principal Wesley Coller. Eric Newman, who produced Snyder’s 2004 feature debut, Dawn of the Dead, is producing via his banner, Grand Electric.

Ori Marmur is the Netflix executive working on the project.

Here’s everything else we know about Zack Snyder’s and Netflix’s Rebel Moon:

What’s the plot of Rebel Moon?

The Hollywood Reporter has revealed the story synopsis for Netflix’s Rebel Moon:

The story is set in motion when a peaceful colony on the edge of the galaxy is threatened by the armies of a tyrannical regent named Balisarius. Desperate, the colonists dispatch a young woman with a mysterious past to seek out warriors from neighboring planets to help them make a stand.

As revealed, the movie is heavily inspired by Star Wars and used to be a Star Wars pitch a decade ago.

Additional plot information for the movie was released in November 2021:

“The film is set in a peaceful colony on the edge of the galaxy that finds itself threatened by the armies of the tyrannical Regent Balisarius. They dispatch a young woman with a mysterious past to seek out warriors from neighboring planets to help them take a stand the Tyrant.”

Since the movie was first announced, numerous concept art pieces have been released and we’ve embedded some of them below: 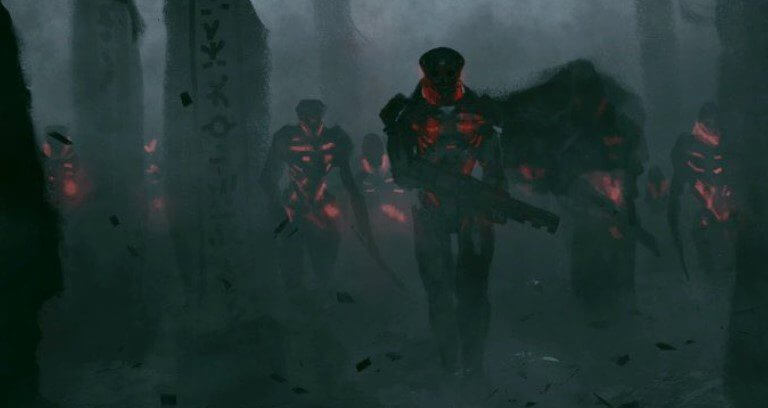 Who is cast in Rebel Moon?

Here are some of the character descriptions for the upcoming Rebel Moon roles:

“Kora – Bold, confident, and self-possessed. Kora is on a path of redemption, she faced unbelievable traume in her childhood and is on a journey to discover her self-worth.

Noble – Charasmatic and imposing, commanding and brutal to the point of being sadistic

Aris – A new soldier, he still holds some innocence and compassion despite the brutality he has witnessed.

Devin – A new soldier – sensitive, and conflicted about what he’s being asked to do by his commander.

Sam – Scandinavian/Northern European. She is a kind, gentle-spirited, hard-working farm girl. Even though she’s not worldly, she is welcoming to the foreigners who arrive in her village.

General Titus (Djimon Hounsou) – Retired general past his prime. Everyone underestimates him

Millius – Trans woman in her 20s and a rebel warrior.

Harmada – Deadly, ageless, giant half-woman, half-spider who preys on vulnerable children in revenge for losing her own. A FX/posthetics role.”

On June 8th, it was announced that Anthony Hopkins (The Two Popes) would feature as voice talent in the movie playing the role of Jimmy, “a sentient JC1435 mechanized battle robot and one-time defender of the slain King.” Kristy Carlson serves as the casting director for Rebel Moon.

Netflix’s Rebel Moon entered production on April 18, 2022 and is expected to wrap on November 4 of the same year. Zack Snyder shared the first behind-the-scenes images from the very first days of filming, including the first look at Djimon Hounsou’s character:

We first got word via ProductionWeekly that filming will span from March 1, 2022, until August 31, 2022. However, a recent update from ProductionWeekly has revealed that the filming dates have been pushed forward by over a month, got underway on April 18th, 2022, and will come to an end by November 4th, 2022.

Recent entries suggest that a sequel of Rebel Moon has already been greenlit on Netflix. In issue 1284 of ProductionWeekly, they state that Parts I and II are set to be filmed back-to-back.

Production will take place in Inyo County, California in the United States. The popular tourist destination has been a popular filming destination, with over 400 Hollywood films reportedly filmed here over the years. It boasts that it’s the “largest Western backlot located in Lone Pine, CA.”

The budget for Rebel Moon hasn’t officially been announced, although our sources tell us the budget for part 1 is between $81 and $90 million. 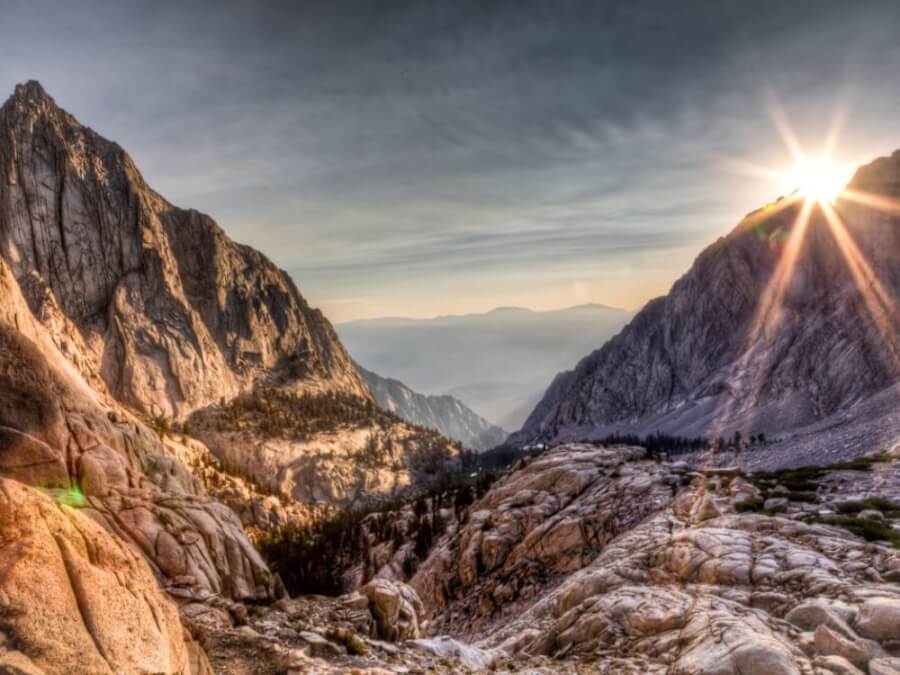 On June 7th, 2022,  Snyder released some footage for a makeup test featuring some incredible costume designs.

Forging ahead. Here’s a recent makeup test I shot on my iPhone. #RebelMoon #GeekedWeek pic.twitter.com/3DaIlzBpLv

On July 26th, Zack Snyder posted that they were on “Day 68” of filming alongside a clip of some behind-the-scenes. Snyder posted on the same day, saying they had custom-made lenses produced specifically for Rebel Moon.

In late August 2022, it was revealed by California’s Film & Television Tax Credit Program that Rebel Moon Part 2 had been awarded $16.6M in tax credits (on its budget of $83 million).

About a decade ago, Rebel Moon was originally a Star Wars pitch developed by Zack Snyder. It would be a more mature take on the universe created by George Lucas and didn’t move beyond meaningful conversations after The Walt Disney Co. acquired Lucasfilm in 2012. Ironically, as we saw years later, a slightly more mature take on the universe would be the very thing to revitalize the franchise in The Mandalorian.

At one point, Snyder and Newman, who was behind Narcos and Narcos Mexico, went down the path of making it into a series. Still, it was ultimately decided to make Rebel Moon a feature film, on which Snyder was actively working the past few years:

“I’ve spent the last two or three years building out this universe. Every corner has to be painted in. I’ve been doing designs, constantly drawing and really cultivating its fertile ground to make this world fully realized.”

Will Rebel Moon become a cinematic universe too?

As Snyder has already launched multiple Army of the Dead projects for Netflix, the question is, will Rebel Moon be the same? Snyder’s answer to that is “hopefully.”

“My hope is that this also becomes a massive IP and a universe that can be built out.”

Netflix hasn’t set a date for Rebel Moon yet, but considering the potential scope of the production, we shouldn’t hold our breath as films of this scale tend to take a few years to make. We would expect 2023 at the earliest.

For a look at everything Zack Snyder and his team are bringing to Netflix over the coming years, check out our Zack Snyder guide.

As a fansite, we love highlighting fan accounts that often do a great job at diving into everything known about a specific project.

Snyder Netflix Updates (@SnyderNetflix) is the best account for tracking all things Rebel Moon, Army of the Dead, and more.

Are you looking forward to Rebel Moon on Netflix? Let us know in the comments.